Ex-terrorist prisoners get jobs on golf course in Bermuda 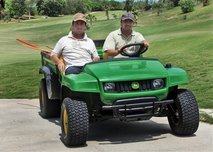 Four Guantanamo prisoners who have been released to Bermuda in June have been given jobs at a public golf course in Bermuda.

The four ex-prisoners are members of China’s Muslim Uighur .

Wendall Brown, chairman of the board of trustees for Bermuda’s public golf courses, said the 4 men replaced a group of Filipino workers who left in short notice.  Employers in Bermuda can only take on foreigners if no qualified local person wants the job.

Mr. Brown said “They have been offered a temporary position at Port Royal until the Grand Slam. There are still special projects that we need to do like cleaning up and beautifying the course … All four of them have been given a job there. It’s on a temporary basis. Two of them speak fairly good English.”

The golf course is hosting the PGA Grand Slam of Golf in October.

Brown said the men were likely to still be working there during the two-day Grand Slam tournament, when golf’s greatest champions of the year will be pitted against one another on the 18-hole course.

Their lawyer in Bermuda identified them as Khalil Mamut, Abilikim Turahun, Abdullah Abdulqadir and Salahidin Abdulahat, and said they had been known by a series of nicknames during the seven years they were held at the detention camp for suspected terrorists on the U.S. naval base in Guantanamo Bay, Cuba.

Their imprisonment continued long after the U.S. military and courts determined that they posed no threat. The United States said it could not send them to China because they faced persecution there, but U.S. politicians blocked plans to settle them in the United States.

The four landed on the 21-square-mile island on June 11 after Bermuda‘s premier, Ewart Brown, negotiated their resettlement directly with the United States. The move enraged the United Kingdom, which insisted the Bermuda government did not have the power to handle such foreign affairs and security matters.

Britain and the United States are still in talks about the men’s future.

Expatriates make up a third of the work force in Bermuda, which has a population of 65,000 and requires permits to work. Brown said the golf course worked with immigration officials to get the men permission to work.

Posted in War on Terror